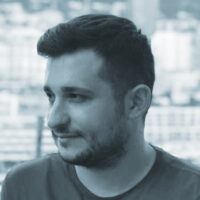 Gejsi Tafa was born on 07/12/1992 in Tirana. He is a creative designer and assistant lecturer at the European University of Tirana.

Throughout his master’s degree studies, he has worked on several projects in partnership with Renault, Faurecia, GEFCO and Schoolab in the field of Automotive Design and Logistics Design.

For years he has been working as a consultant and freelance designer for various clients in the field of digital, graphic, and industrial design.

In 2018 he published the book "History of Design" by the author Prof. Gabriella D’Amato, which she translated from Italian into Albanian. He also worked as a graphic designer (cover, layout, and advertising campaign) for the publication.