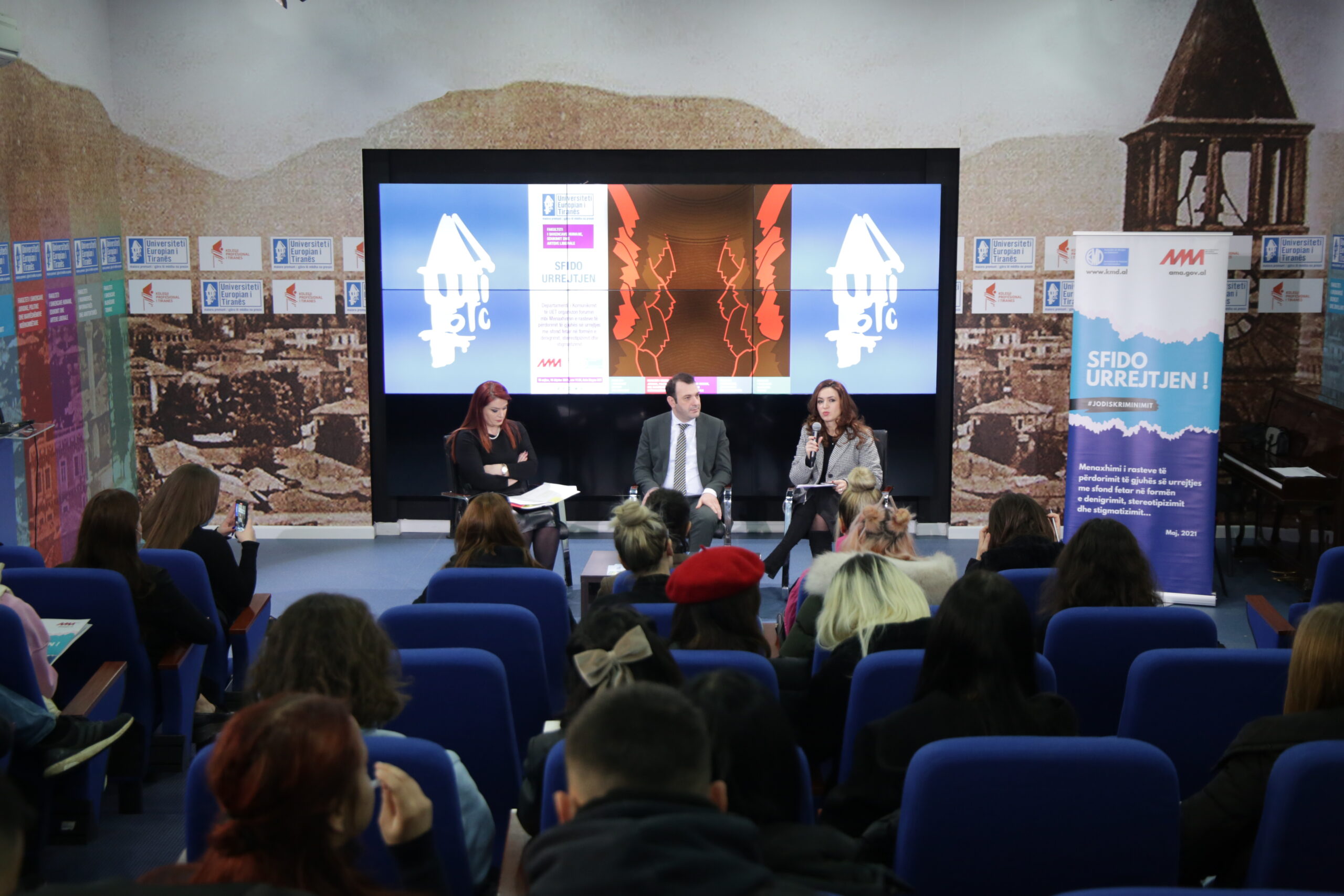 The Department of Communication at UET, in cooperation with the Commissioner for Protection from Discrimination and the Audiovisual Media Authority, organized a forum on the management of hate speech in the media, in the form of denigration or stigma

In the age of digitalization, the word arrives faster than the wind and along with the many benefits that this process has, it also takes with it negative elements, such as hate speech. In fact, discrimination is not a new phenomenon or of the times we live in, but in the current conditions it becomes more visible and has more impact. In this context, the Commissioner for Protection from Discrimination and the Audiovisual Media Authority have launched a campaign to challenge hatred and say no to discrimination, to raise awareness of as many actors or elements of Albanian society.

In a forum held at the European University of Tirana, with students of media and communication, under the moderation of Dean Belina Budini, was talked about this phenomenon, how it appears in the Albanian reality and everyday life, or beyond, which are the most groups discriminated, how this phenomenon has been combated so far and what can be done to be more fruitful further.

The Commissioner for Protection from Discrimination, Robert Gajda said that in the "Challenge Hate" campaign, universities have been chosen for awareness because young people are closer to this communication, but also for the fact that they will be the professionals of tomorrow.

“"First, we really want to address the work we do in our daily lives to young people. This is also due to the ease of communication. We find it harder to talk to the third generation because they are consolidated into one thing and require more time to update some aspects. It can affect young people, not because we say so, but we have tried to justify and argue all the negative aspect and impact that the use of hate speech causes, not only by the traditional media, which are less used, but by given the dimension of online media and social networks. The second reason is related to the profession. Young people are the professionals of the future and where better we can influence any profession, in understanding discrimination in itself, the harm it causes to the human being. The more we inform and influence in this aspect, the better our society will accept the different, will see the different as a value and not as an inferior and negative aspect ", said Gajda.

He further explained that from the experience and decision-making of the Commissioner for Protection from Discrimination, in Albanian society there are mainly 4 most discriminated groups, in different forms: Roma and Egyptian community, people with disabilities, LGBTI community and women .

Discrimination is not an Albanian phenomenon, or that lies within the contours of a certain society. It is a widespread phenomenon, which is encountered everywhere and where its victims are mainly the smaller ethnic, cultural communities, or with other identifying specifics. Part of the discussion was the discrimination of Albanians living in different parts of the world, but that this phenomenon has been shaped mainly through the media.

Dean of the Faculty of Humanities, Prof. assoc. Belina Budini focused mainly on the American and English media, which have been taken by her as the object of study, while emphasizing that stereotyping is also influenced by the way the Albanian diaspora is positioned. 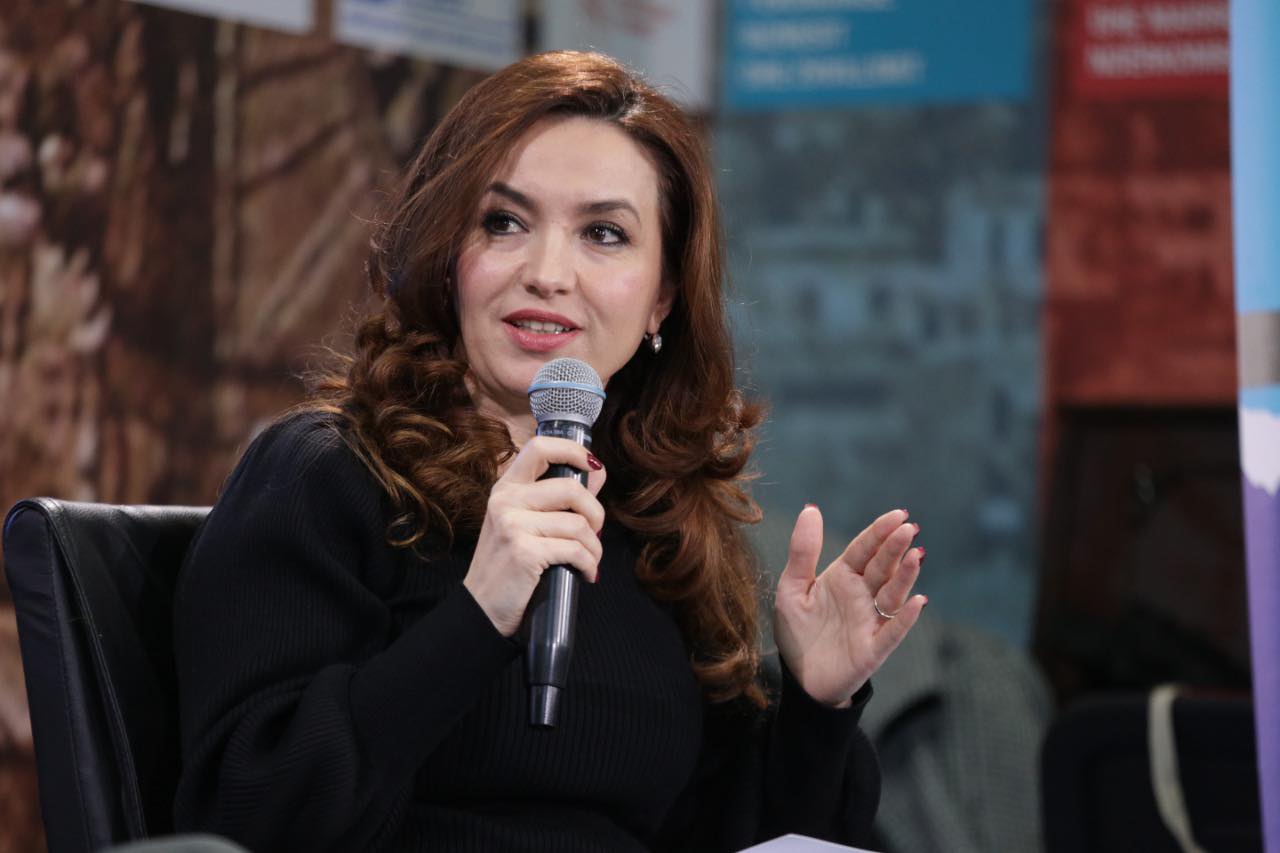 "From my research so far, it results that the language of the media is full of stereotypes and this also happens in serious media. They are prejudiced not only against Albania, but also of all communities in the Balkan region. "When I interviewed one of the editors of" The Economist ", who has dealt with the Balkans, why this is happening in Albania or other countries around it, he said that there is a lack of voices lobbying or denouncing discrimination" , underlined Budini.

The guests stayed in the same line of thought, showing personal cases of discrimination, while staying in different European countries for work or study reasons.

The President of the Audiovisual Media Authority, Armela Krasniqi said that not only well-known personalities are enough to change the image of Albanians, but also the cooperation of the Albanian media.

“"We are a small nation and the image that was created in the first years after the fall of communism is difficult to change. But I strongly believe that the Albanian media are the ones who have to face this. Famous characters are sporadic and they alone can not change the created thought. We have to work as media. "They should cooperate by taking the best examples of Albanian communities" said Krasniqi.

Hate speech in the media

The Albanian legal framework mainly controls and functions only for audiovisual media, while for online media there is still no specific law. The president of AMA said that the institution she leads finds it difficult to access online media, despite the fact that there are many complaints about them. 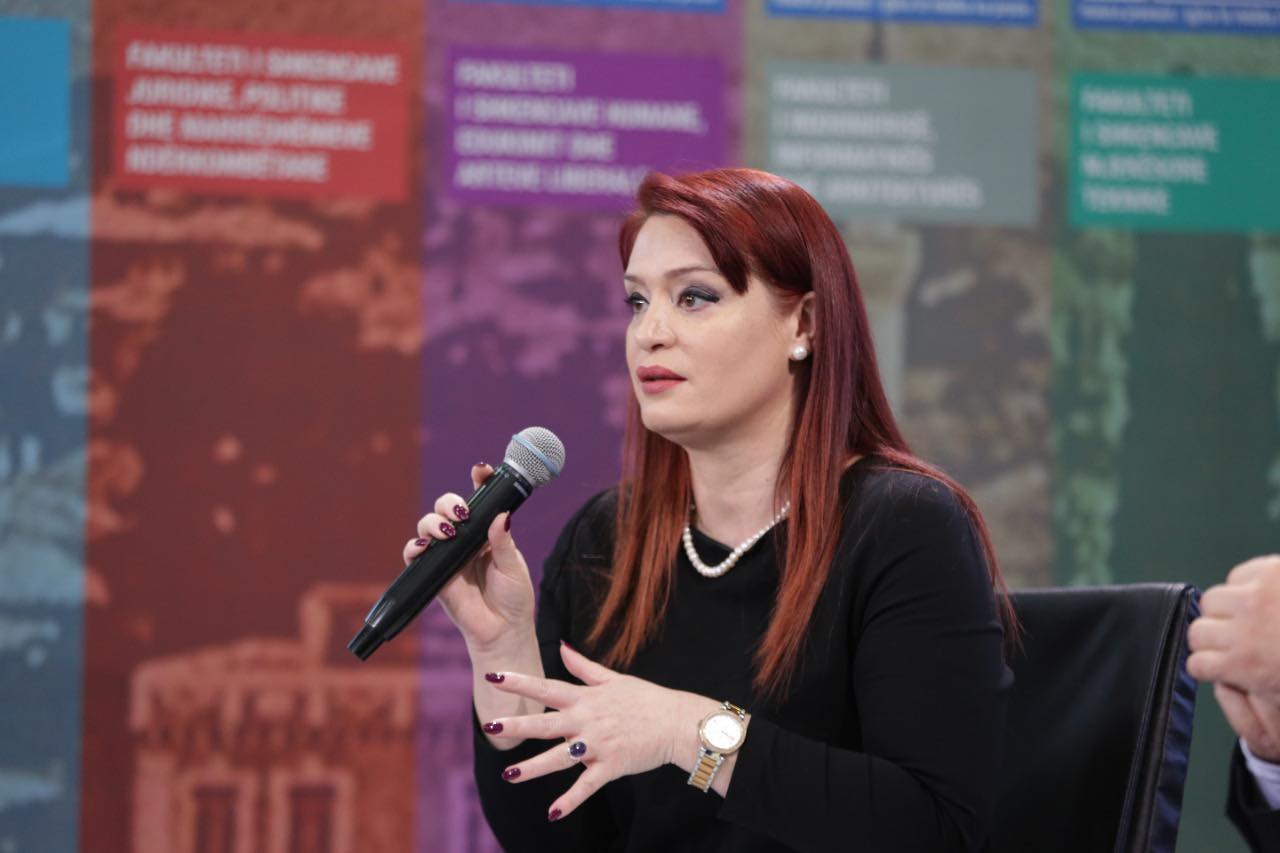 “The Albanian legal framework mainly controls and functions only for audiovisual media, while for online media there is still no specific law. The president of AMA said that the institution she leads finds it difficult to access online media, despite the fact that there are many complaints about them. said Krasniqi, adding that the law is not everything, as journalists themselves need to be sensitized and be more careful in their language. Further, Krasniqi said that the AMA approach is not punitive or penalizing, but mainly awareness-raising. She informed the students about the two upcoming AMA projects: The first is the opening of a library within the institution, and the second is the opening of a competition on student diploma theses, focusing on the role of this institution.

Commissioner for Protection from Discrimination, Robert Gajda said that the media should not only inform, but also educate and pass models.

"It should promote everything that society has, but there should also be a special focus on what results as the most discriminated groups in our society. "The media informs and educates, transmitting models", he said.

Parliament in our country often turns into an arena of debate and hate speech. Deputies, aware that their word is heard by a wide mass and becomes part of the news on portals, do not spare hate speech. The Commissioner for Protection from Discrimination said that they have fined an MP because of his language, while emphasizing that the MPs find it difficult to apologize, which does not happen with media personalities.

“"We had concrete cases with an MP. We fined him. Indeed, we have asked the Assembly to activate its mechanisms. It has adopted a decision which is the Code of Conduct, which has the strongest provisions with hate speech, discrimination, etc. There is also an Ethics Council that has oversight, but provides sanctions for MPs, such as. expulsion from the Assembly. We have requested and initiated several procedures for the Assembly to activate these mechanisms. It is absurd to use hate speech in the Assembly, because the deputies are representatives of the people. We have noticed that the deputies do not apologize. One of the things they aim for is to understand the mistake and the effect they cause and then apologize, which they find very difficult. "Journalists and personalities from the world of show business have it easier", said Robert Gajda.

Faculty of Economics at UET published the new editon of scientific journal: "Agriculture Back is Back!"